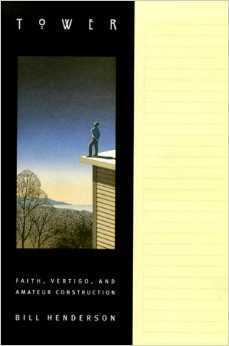 "Perhaps the gentlest, sweetest, most introspective and humblest towering achievement in the history of towering achievements." –Bill Roorbach, Newsday
"Beautiful, moving, warm and wise... utterly compelling, this should become a classic." –Joyce Carol Oates
"Should take its place on the shelf next to Thoreau's Walden and the Nearing's Living the Good Life. Like those classics, it's a blueprint for a simpler life." –Joseph Hart, Minneapolis Star Tribune

***
After finishing his last memoir Henderson headed for Maine, irresolute. He discovered a plot of land on a hill overlooking the sea and decided to build by himself a tower for no reason. The meditations that sprang from hauling lumber and pouring his own foundation became Tower.

For Henderson, constructing the tower was an exercise in faith and self-reliance. He guides us through the details of design and construction with clear illustrations and good humor, often digressing to contemplate the various towers of Yeats, Joyce, Sam Rodia, and Gustave Eiffel, among others. The finished result is not only Henderson's completed tower but a revelatory insight into what has motivated the builders and thinkers who inspire our own efforts to attain a higher viewpoint.

***
More reviews for Bill Henderson's memoirs:
Simple Gifts: One Man's Search For Grace (Free Press/Simon & Schuster, 2006) Henderson tells the story of how he found community and joy through the singing of old-fashioned hymns in a small wood-framed country church. "You will love this book." –Peter J. Gomes, Memorial Church, Harvard University

His Son: A Child of the 50's (Norton, 1981, available as a Pushcart Press paperback). An anguished yet loving portrait of a religious man, his questioning son, and an American era that we will not see again. "His Son is a powerfully moving book. I was touched, and saddened and at times I laughed out loud." –Anne Tyler

Her Father (Faber and Faber, 1995, available as a Pushcart Press paperback). A highly personal yet universally familiar account of one man's passage to adulthood and spiritual awakening through the birth of his daughter.
"I believe everything Bill Henderson says in Her Father especially the tales he tells on himself." –Rosellen Brown
"Trenchant, iconoclastic and heartfelt – in short, True." –Rick Moody
"A brave warts and all memoir." –Booklist