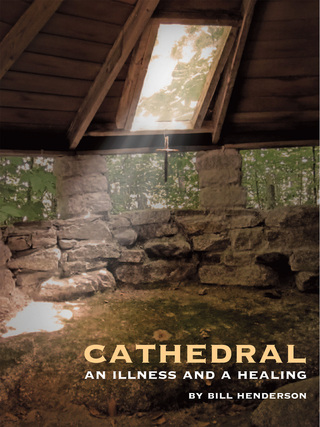 Cathedral: An Illness and a Healing

One man's quest to build a small stone cathedral despite the odds. Influenced by a visit as a young man to the Chartres Cathedral in France, years later, Pushcart Prize series founding editor Henderson decided to build his own cathedral as an act of spirituality and to honor friends and family members. Using native stone from the surrounding Maine woods, he wanted to build his cathedral by hand, "on a hill overlooking the sea. I would do this by myself over a long time. I imagined there was no rush. Indeed the idea of rush was anathema to me. Rush was what I had come to this Maine hill to escape."   Blending picturesque details of the Maine countryside with thoughts on the local villagers, God and Christianity, Henderson leads readers through the meditative process of finding and laying his "saint" stones, each one ascribed to a particular person. Although he knew the building process would be labor-intensive and slow, what he didn't anticipate was being hindered by summers that were too rainy and cool and a cancer diagnosis. Suddenly, time both sped up and stood still, and Henderson's half-built cathedral remained untouched as its builder underwent surgery and the slow process of recovery. "Hope and despair alternated through that summer," writes the author. "About the cathedral, I had thought little…let it crumble into ruins." But despite these moments of anguish, as his strength returned, Henderson persevered. His short musings on the vagaries of life, love, faith, family, friends and death give readers moments of pure joy to ponder, and the author's determination to finish his project, despite the circumstances, will cause them to cheer. A brief, lyrical exploration of the author's construction of a personal sacred space, one stone at a time. –Kirkus Reviews 2014

"Bill Henderson has written a tale of faith and survival, a fascinating history of cathedral building, life in a small town in Maine and the struggle against cancer and the 'pride' of despair. But most moving is that of a man's faith in love and family and the regeneration hope brings. It's a memorable and inspiring book." –Philip Schultz, Pulitzer Prize winning author of My Dyslexia and The Wherewithal.

Cathedral is most akin to Henderson's Tower: Faith, Vertigo and Amateur Construction, a Thoreau-esque chronicle of building a tall structure on the grounds of his hilltop property in Maine. But Cathedral is more overtly a spiritual memoir like his Simple Gifts: One Man's Search For Grace, a tribute to the pleasure of singing hymns.

Like all Henderson's books Cathedral is equal parts wisdom, self-deprecation, laughs, aching honesty, and inspiration. And, like his cathedral itself it is lovingly constructed. (Available Fall 2014, $22 hardcover, 235 pages, W.W. Norton Co.)

Comments from Bill Henderson
"Writing teachers often dictate, 'write about what you know', I think it is more important that we write about what moves us deeply. For some reason I thought it important to build a holy stone edifice at the same time I was undergoing cancer treatments. Completing that structure was very important to me while enduring chemotherapy, radiation and three operations. I also learned that 'me' is not very important. It's not about me. At times I was depressed, angry, and felt betrayed by my affection for religion. A fraud, I thought while chemically exhausted, but that's wrong I now know. I am a small part of a very great mystery and I am very grateful for that part as long as I may live. In building my humble cathedral I found physical and spiritual reserves I never knew I had. We are surrounded by miracle, love and wonder."

Reviews from Henderson's previous memoirs:
"His Son is an American masterpiece. It is simple, serious, hilarious, and unforgettable." –William Saroyan
"Her Father is funny, touching and ridiculously honest... Bill Henderson manages to regard his follies with an almost religious wonderment." –Phillip Lopate
Wendell Berry in a letter to the author, "I love your book Simple Gifts. It is wholehearted, goodhearted and extraordinarily moving – to me and I'm sure to anybody who treasures the best of the old hymns."
"Simple Gifts is powerful... a thoughtful consideration of Henderson's life and the role hymns have played in it." –Publishers Weekly